Posted on January 11, 2019 by nadineandadamblog

Recently, I was approached by a newspaper reporter for an interview on Non-Dairy Milk Alternatives (NDMA). You know, almond milk and the like. 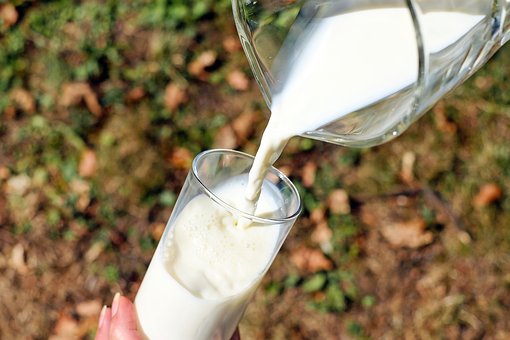 Full disclosure here: while I am not a dairy farmer nor is anyone in my family, I am eating cereal with real milk as I write this. I am a dairy girl all-the-way! I also realize that if you are someone who does not share my enthusiasm, just reading this blog post will not likely change your opinion. But I firmly believe that you deserve to be fully informed on the issue.
The most obvious reason a consumer may choose a NDMA over cow’s milk is the presence of allergy to the proteins whey or casein or both. (This is not to be confused with lactose intolerance or A1 protein intolerance. There are dairy formulations on the market to deal with these conditions.) Milk allergy affects about 3% of children in the U.S. under the age of 3 years, and most outgrow it by middle school.  While lactose intolerance on the other hand is life-long and affects close to 75% of the world’s population, those afflicted can ingest some lactose without any consequences at all.

Other reasons for dairy avoidance are valid as well: 1) conflict with dietary restrictions in Crohn’s disease or Low FODMAP, or lifestyle choices such as vegan; 2) concern for potential health risks related to antibiotic residues, pesticides or hormones; or 3) taste preferences.

As for A1 protein intolerance, this is a relative new-comer on the scene of gi-disturbance with symptoms that mimic lactose intolerance. I have had clients with complaints “lactose” intolerance  that a lactose-free diet did not improve their symptoms at all. At this point, I am unable to find data indicating prevalence. Maybe the confusion with similarities of symptoms is the reason. And it has been suggested that the A1 protein may be the source for inflammation that has been routinely associated with cow’s milk.

I am actually surprised by the number of NDMA out in the market place today, and unfamiliar with some (hemp, oat, quinoa) since they are not available in your typical grocery store. None of them are close to the nutrient density of real milk.

While nuts are nutrient power-houses in their own right, nut pulp is strained out in the manufacturing process and the fiber, protein, vitamins and minerals are lost.

Some nut and plant-based milks are fortified with vitamins A and D, and calcium, making their nutrient profile similar to cow’s milk for only those 3 nutrients. And carrageenan and vegetable gums are added to give the beverage a smooth texture.

Deep in the Code of Federal Regulations Title 21 of the Food and Drug Administration (FDA)is the definition for the legal term milk: milk is the lacteal secretion, practically free from colostrum, obtained by the complete milking of one or more healthy cows. milk that is in final package form for beverage use shall have been pasteurized or ultrapasteurized, and shall contain not less than 8 1/4 percent milk solids not fat and not less than 3 1/4 percent milk fat. milk may have been adjusted by separating part of the milk fat therefrom, or by adding thereto cream, concentrated milk , dry whole milk , skim milk , concentrated skim milk , or nonfat dry milk . milk may be homogenized. The American Dairy industry has been demanding enforcement of this standard since 2010. The Court of Justice of the European Union in Luxembourg in 2017 announced purely plant-based products cannot, in principle, be marketed with designations such as ‘milk’, ‘cream’, ‘butter’, ‘cheese’ or ‘yogurt’, which are reserved by EU law for animal products.

When choosing a NDMA beverage for your family, do your homework and ignore the hype.

Ultimately I never did the interview since the reporter never kept our scheduled appointment. Her loss is your gain!

Nadine and Adam are mother and son. Nadine lives in Florida where she has provided outpatient MNT in a large healthsystem for the past 20 years. In addition, she teaches nutrition to second and third year family medicine residents. She is a past-spokesperson for the Academy of Nutrition and Dietetics. Adam lives in Washington State. His career has largely been involved in recipe development and food production. He is currently developing recipes and menus for the Seattle schools to meet the new federal guidelines for school nutrition programs and he does outpatient nutrition counseling. He is also a voice in PSAs over Seattle radio representing the Washington Academy of Nutrition and Dietetics.
View all posts by nadineandadamblog →
This entry was posted in Food and Healthy Choices, National Milk Day, Posts by Nadine, Trending. Bookmark the permalink.